Glow in the dark slime that is bright Neon and super stretchy is awesome. Really!  Recently we watched the new ghost busters movie and the kids asked if we could make some Ghost Ectoplasm slime.  So we did and here it is.  I ended up watching the kids experiment with it for an hour or more, they were having a great time and learning so much.   This is the U.V. activated Glow in the dark slime recipe that started off as pretend play with an Ectoplasm baby slimer ghost and ended up as a learning experience exploring math, motion, gravity and science.

Keep reading for an action video of the slime and a print out recipe for you. 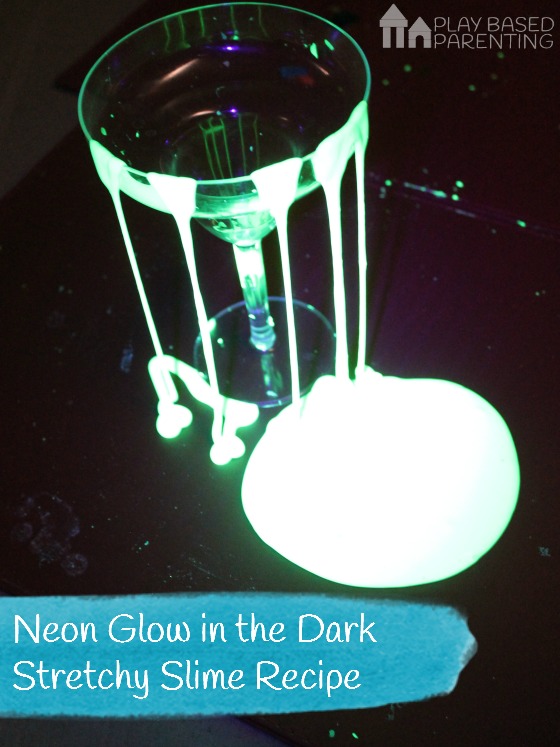 Neon Glow in the dark Slime

The Ectoplasm glow in the dark slime is really bright, stretchy and fun to play with in daylight, but under a Ultraviolet light is glows neon bright as if it has supernatural powers.  It was memorising.  The glowing slime has a soft stretchy texture and can string out to thin long lengths before breaking. The kids thought it was so interesting and tried experimenting with rolling balls and worms, seeing how long it would hold shape before flattening.  If they waited and let it flatten right out they could flip it over like a pizza base.  This is a simple non-toxic recipe using household ingredients.

Glow in the dark slime Ingredients. 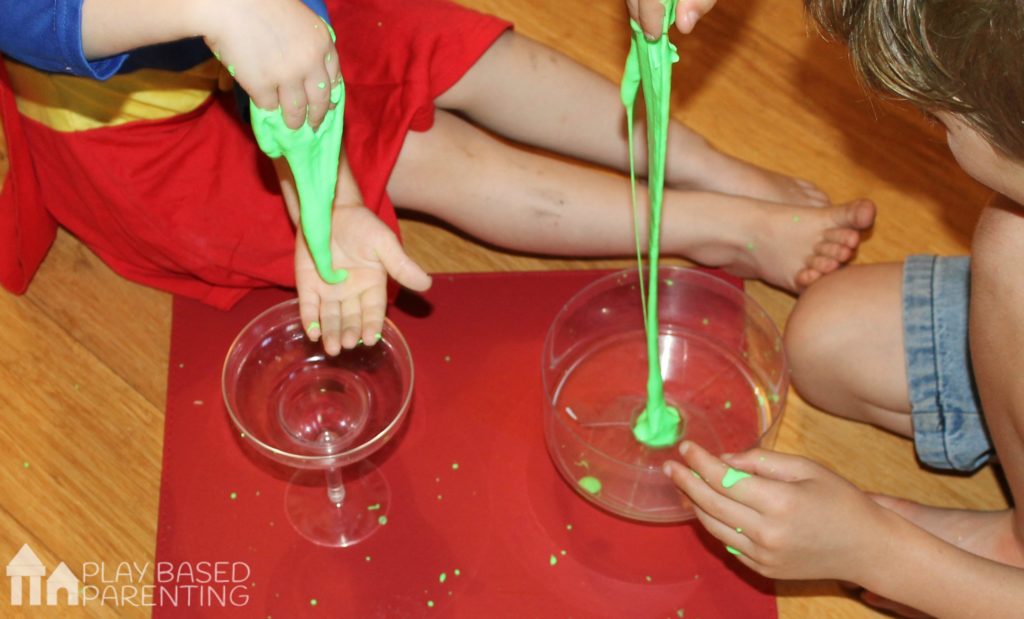 How to make Ectoplasm Glow in the dark slime.

Preparation-  grab 2 old green and yellow highlighters, dissemble the casing and put the ink tube, or ink canister into 1.5 cups of water.  Let this soak for a few hours at least.  Maybe even overnight.  Squeeze as much neon highlighter ink into the water as you can.  Then separate it into 2 bowls, 1/2 a cup in one and 1 cup in another.

Mixture 2– 1/2 a cup of our highlighter neon water and a bottle of Elmers non-toxic school glue. Stir. Depending on your glue bottle size, this should be roughly 1 part glue/1 partwater.

gradually pour in your Mixture 1, the boron solution, into Mixture 2’s bowl. You might not need it all.  Stir until it thickens, remove from excess liquid and let it sit for a minute. 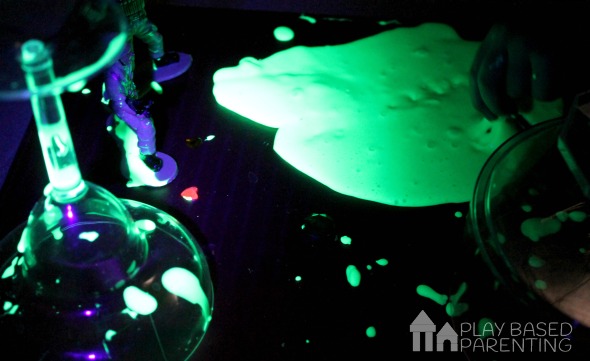 The science behind stretchy slime.

We were learning all these interesting things.  Dimples and Miss T were asking stacks of questions and I was searching for answers, all the while they were experimenting and playing with the glowing slime. 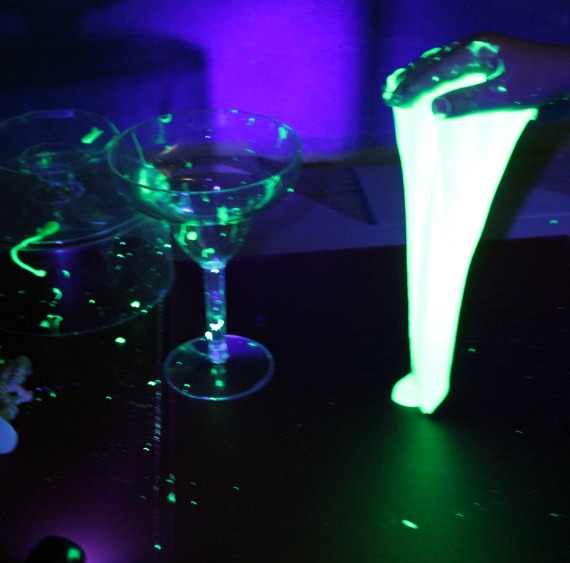 Playing with UV activated Glow in the dark slime.

, or “black light” you really need to get one.  They are so much fun.  Anything fluorescent, glow in the dark or neon, like highlighter ink for example, will glow really brightly.  When Dimples got his torch we investigated his bedroom in the dark and he was amazed with how many thing he could find that glowed.  The Slime radiates under the UV light, even in a semi-dark room it glows super bright and is very intriguing for the kids to play with.  (watch the video at the end of the post).

Slime is a cool experiment for kids, even if they do not understand the science behind it.  Just making the slime and seeing it transform from two water substances into a slime is interesting for them.  Playing with it is the fun part because of the strange texture and flexibility.  Both children experimented with shaping it and rolling it, putting it in and over things, trying to bury jewels and soldiers in it and they loved just watching it fall and ooze back down to the surface.

There was a lot of ghost buster pretend play as well. At one stage the slime was a baby slime ghost. It is slimy and similar to gak, so it has a cold wet feel but doesn’t stick to your skin.  It will stick to materials and course textured items, so it is best to use it on a glass table, placemat or a plastic tray.  If it does get where it shouldn’t be you can use vinegar to remove it. 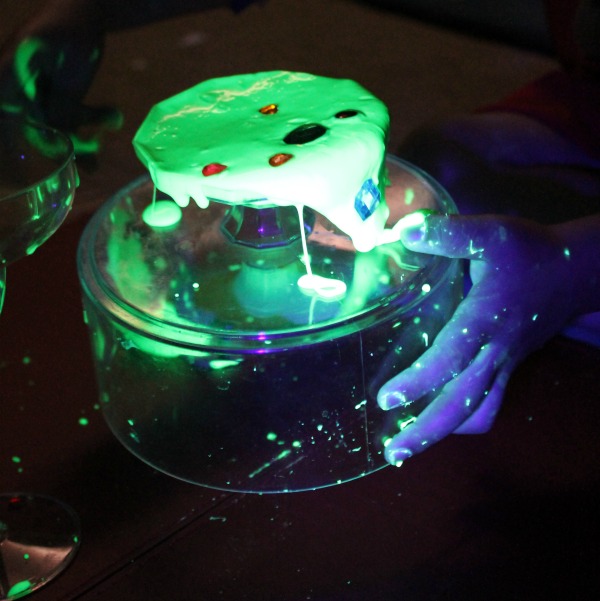 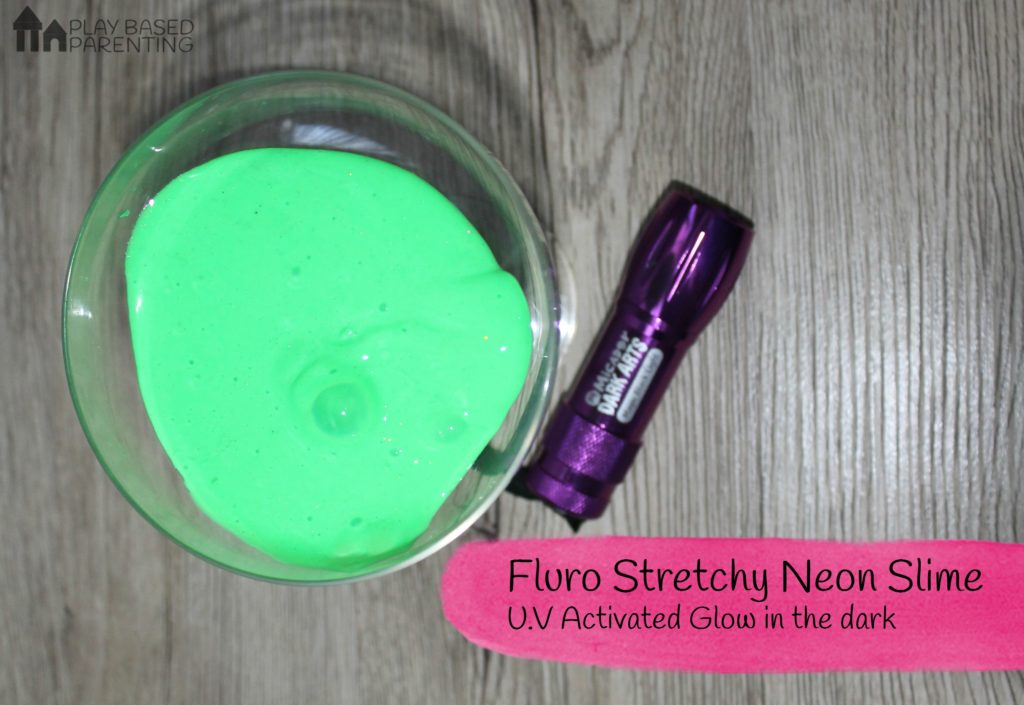 The secret to making Slime & your Printable Recipe.

Join the Play Based Parenting newsletter to gain instant access to this printable.

The secret to making slime successfully is to remember it is a process.  Your glue/water mix is your base, your boron solution might always vary, so you should pour this in slowly and mix the slime before adding more.  make sure you test the consistency as you go, if you pour it all in too quick and it turns out the boron solution is stronger than this recipe, your slime will clump up.  The reaction between the polyvinyl alcohol and the boron needs to be worked together slowly so all proteins meet.

Here is the recipe in a pdf printable so you can make it again.  If you store your stretchy glow in the dark slime in an air tight container or a zip lock bag it will last for ages. The only trouble you might have is hiding it from the kids. 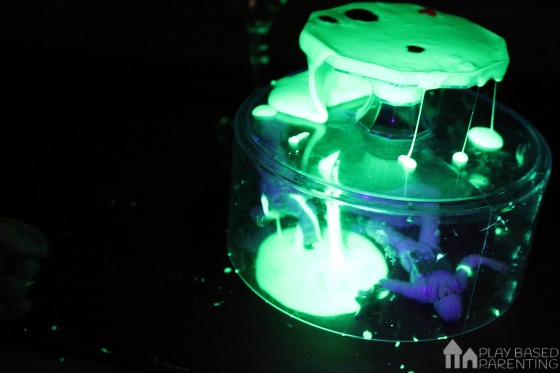 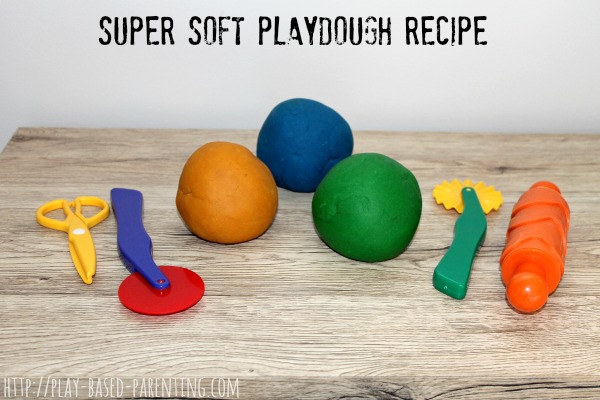 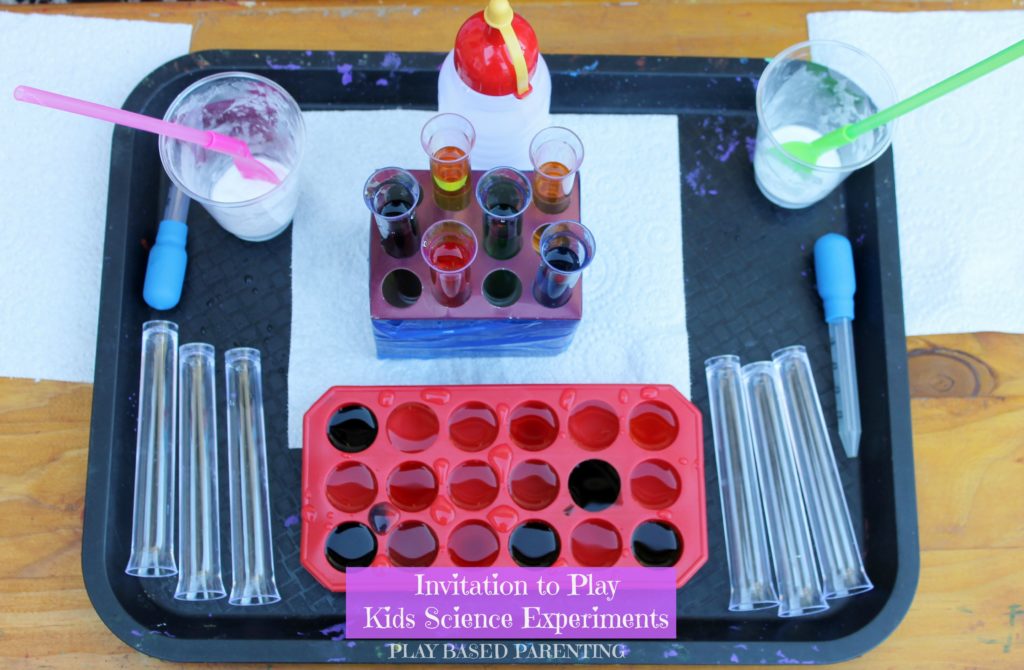 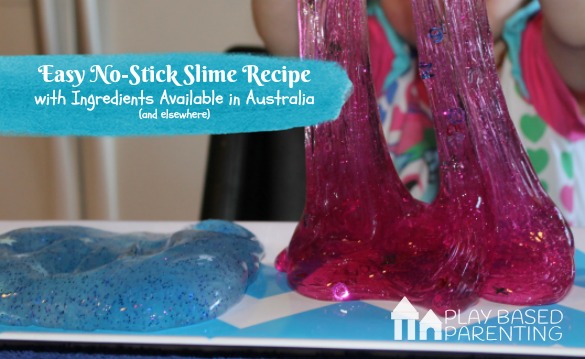 I would love for you to join me on my social media platforms, feel free to leave a comment or get in touch if you have any feedback.

Thanks for stopping by and I hope to See you again soon.
Renee  xx 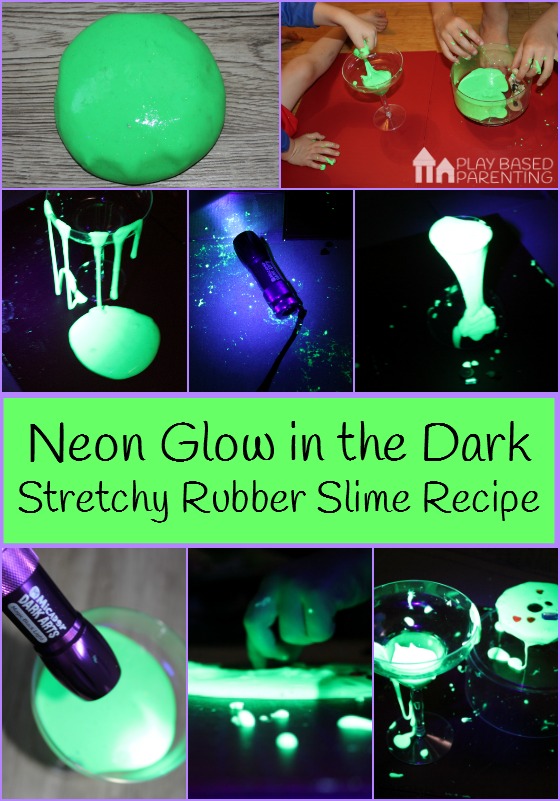 Get a copy of my eBook “Positive Parenting Tips – managing behaviour in children” for FREE. 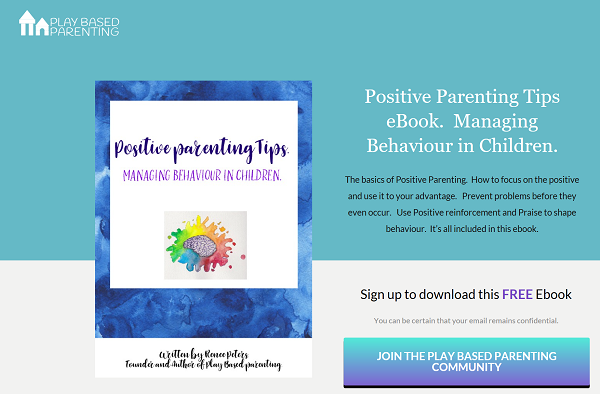 The Ectoplasm glow in the dark Slime Action video.

You are here: Home / Activities / Science for Kids / Ectoplasm Glow in the dark Slime Recipe 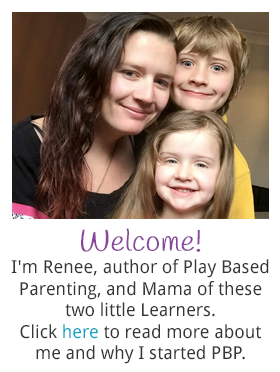 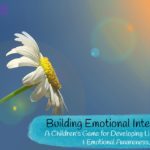 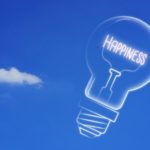 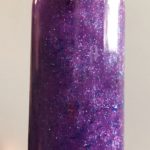